The charm of the medieval castles of Valsugana, a unique wealth of Trentino ... 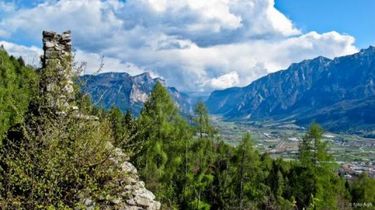 View from Castellalto
Those who are fond of medieval castles or those who simply want to dive into Knights and peasants atmosphere of the middle ages have many opportunities here in Valsugana and in Trentino. The most conserved castle, open to the public, is Castel Ivano . A large park and a wildlife oasis surround the impressive medieval complex overlooking the village of Ivano Fracena and Eastern Valsugana. Many nobles have inhabited this castle: from Dalla Scala of Verona to the Visconti, from da Carrara, until it became the property of Conti Wolkenstein.

It is one of the few castles in Trentino with its ramparts perfectly conserved, an architectural game encompasses medieval style in the wall, the Renaissance in the residence and in the loggia. From the guard tower, on which there are still clearly visible the family crests, you come to the moat and to a large gate, and then to the outer courtyard with a fountain and a historical 16th century acacia. Then the great hall of the old barn and the seventeenth-century chapel. If you are looking for a unique location for your wedding, the castle will make you live unforgettable experiences, and overnighting your guests will be our task ...

Castel Telvana dominates the valley in all its extension as is situated in a panoramic position above the historic town of Borgo Valsugana .

The story of Castel Telvana merges with that of Borgo Valsugana, the ancient Ausugum, then Borgum Ausugi, an important Roman stronghold on the Via Claudia Augusta Altinate.

It is reachable along a picturesque medieval lane, known as the path of castles, which departs from the historic center of the village, on the slopes of Mount Ciolino, to get up to the back of the Castle from where you may admire the Valsugana .

The castle of Castellalto , at the foot of Mount Musiera, dominates the area of Telve. It dates with probability in the 12th century, and was restored in the 16th century. It remained inhabited until at least the end of the eighteenth century. In the 19th century drawings by Sartorelli it is represented as an impressive palace of towers. But it was abandoned, as it was in little strategic and isolated position, besides it was difficult to access; it was eventually used as a quarry for building materials. It was largely destroyed during the First World War, in the fighting of June-August 1915. A partial access to the castle is possible from the path that reaches the top. The fresco of the crucifixion adorning the chapel, still readable in the 1950s, is now almost completely disappeared. A very easy trekking starting from the village of Parise, above Telve, takes you to the entrance of the Castle. There are countless legends around the charming medieval palace and the atmosphere definitely recalls listening to the voices of peasants and vassals that once lived there ...